While Trumpism has networks of support amongst far-right white nationalists which Biden lacks, there is no doubt that the Democrats and Republicans are on a unity ticket when it comes to the agenda of deportation, privatisation, and war that creates the far right. The nature of this election cycle was seeded decades ago by the orientation of the US’ corporate run political system, and whatever the result of the election it is vital that people be ready to resist the so-called ‘leader of the free world’ on the streets.

Despite the efforts of ‘class struggle’ Democrats in the midst of the Sanders campaign to break their party from corporate control, the class basis and politics of the Democrats has not truly changed. These campaigns to bring social movements into the Democrats for the purpose of reshaping the US have a long history with Jesse Jackson ushering the civil rights movement and black voters into the Democrats during his primaries campaign, which ultimately weakened independent organisation on the left. While the rise of Sanders is a symptom of positive shifts in popular consciousness that we should be cautiously optimistic about, the attempts to elect ‘organisers-in-chief’ instead of building social movements and class struggle is not viable or supportable, and particularly not within the Democrats.

The Democrats are not a party of the working class in the way that even the corporate funded Australian Labor Party can try to claim, but rather a wing of US capitalism. The US Democrats are an open ballot line with minimal membership structures beyond committees that are linked to corporations, in contrast to the affiliations most labour parties have to union bureaucracies and member branches. As a consequence their base – while definitely far more diverse than that of the Republicans – is not clearly supported by the working class of the US. Much of the working class are disenfranchised or disillusioned with major electoral forces, the most brazen example being that many ex-detainees (a large proportion of whom are over incarcerated Black and First Nations communities) are not permitted to vote.  Despite being relatively popular and having a decisive victory, Bill Clinton only received the support of 24% of those who are eligible to vote in his campaign in 1996, which is hardly the mass base of worker support you would expect in such a firmly two party system. The only selling point the Democrats have had to offer people for decades was the most cynical form of identity politics, and the fact that they’re not led by men going by the names of George Bush or Donald Trump. 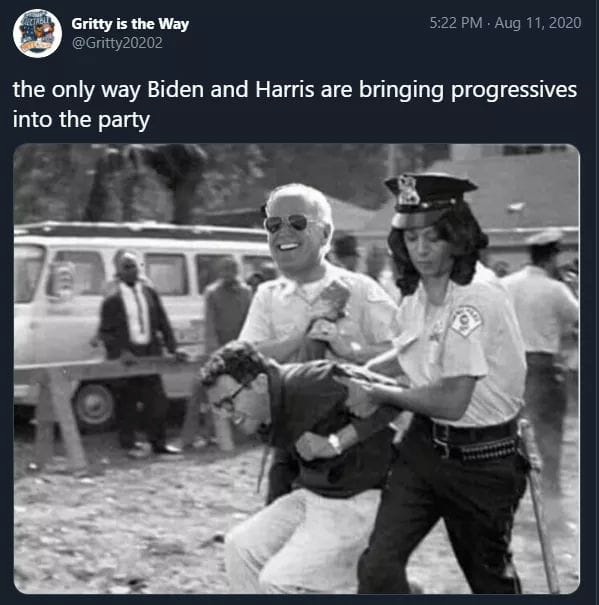 This makes Biden, Clinton, Obama, and Gore more comparable, as candidates, to the Malcolm Turnbulls and Gladys Berejiklians of the world than to the degenerated and corrupt centre-left reformists with which most Australian voters are acquainted with in our electoral races (with the Trumpist Republicans being more in line with One Nation here). This clarifies why the Democrats have so wantonly embraced neoliberalism and imperialism with more drones in the Middle East under Obama than Bush, support for coup d’etats of an elected government in Bolivia, a rate of deportations of ‘illegals’ under Obama that saw him labeled the ‘Deporter-in-Chief’, and a disgusting enthusiasm for privatisation without which neoliberalism would not have flourished so dramatically in the US. Biden is par the course amongst this hellpit for progress as a supporter of war in Iraq, a fence sitter on abortion rights, author of the crimes act which expanded the prison industrial complex we are familiar with today, and was one of the Democrats who reinstated Bush’ tax cuts. Furthermore he is the subject of sexual assault allegations, which former #MeToo activists have denied in the name of unity with the Democrats, and while he does not support a wall at the Mexican border he and other Democrats did vote to build an electric fence. We should not confuse ourselves into ridiculous notions like the idea that Trump is the lesser evil nor think that he is popularly supported by a mythic mass of white workers, but this should be indicative of the political orientation of the Democrats and why the results in the 2020 election are so close despite the heinous nature of Trumpism.

This is why we cannot rely upon the Democrats to mount a meaningful resistance to Trumpism – they do not genuinely disagree with it. Biden has made this clear with his stance that he and Trump are ‘not enemies’ and ‘the next step is to turn down the temperature’, and this has been foreshadowed by the Democrats’ long focus on opposing Trump due to his incompetence and mismanagement, rather than comprehensively opposing Republican policies and budgets. In previous closely contested Presidential elections such as Gore vs Bush in 2000, the Democrats openly conceded the election to Bush in the name of unity despite voter fraud and a margin of only a few hundred votes. The strategic lesson that the Democrats took from this, and the subsequent war Bush instigated in Iraq two year later which a majority of Democrats Senators supported, was to attribute their loss to Ralph Nader and the Greens and relentlessly campaign against independent left organisations to the point of trying to get the Greens purged from the ballot this election. We should see it as a genuine possibility that the Democrats will seek a rapprochement with Trump and his supporters so as to ‘end division’.

We should expect that this strategy will not work. Going into the campaign Trump declared he will not accept the results of the election unless he wins. Trump has already claimed victory despite what seems to be at time of writing a loss in both the popular vote and in the electoral colleges. He has an enthusiastic base of white supremacists – many of whom are gun owners – that have already been protesting to stop the electoral count proceeding, and in an ultimate Karen move he intends to proceed to have the election invalidated through a court featuring sympathetic appointees. Luckily he seems to lack the support of the military and has fraught relations with the FBI, so a coup against democratic results in the form that the US has supported in other countries is not likely. However, Trumpism has not been dislodged from power and there is still a pathway for Trump to remain in the White House.

As anarcho-communists we need to be clear that Trump imposing his rule is not a trivial matter. Biden as a candidate is not supportable, and while I would’ve voted for a sizeable Greens or socialist campaign (for e.g Nader) to critically support those who are willing to break with the Democrats, I would not take time out of work to vote for Joe Biden who wishes to shoot BLM protestors in the legs, and wrote the Crimes Act many people of colour are fighting today. But whatever our jaded views on elections we should not shrug and declare that it doesn’t matter who is in government and how they got there. Several trade unions, and Black American clergy leaders, have called for a general strike against Trump if he attempts to stay on as President despite his loss. As revolutionaries we should join working people in their resistance to Trump if it comes to it, and argue to extend the call to be less about just replacing him with Biden and more about actually resisting the politics of Trumpism which the Democrats paved the way for. We should – if the occasion calls for it – also be prepared to organise solidarity actions here in Australia.

We should also be clear that in the likely scenario of Trump not staying on, and Biden entering the White House that this is not much of an outcome either. Biden continues the political history of the Democrats, and unsurprisingly has a long history of supporting some of their worst ideas. He will likely be working closely with the Republican leader of the Senate, MitchMcConnell, who Biden has a long history of compromising with despite McConnell being willing to shut down the government to thwart Democratic aims under Obama. This gives Biden the perfect excuse to pivot as far to the right as he wishes, and excuse his actions with reference to needing to placate the Republicans. Leftists should be willing to protest this regime under Biden too, and continue to assert that Black Lives Matter. This means marching alongside people who support the Democrats – as well as the numerous people who don’t – and if Biden prepares to visit Australia then we should prepare to protest him just as we were willing to protest Trump. We should expect that the real opposition to Biden will come from social movements like BLM rather than ‘class struggle’ Democratic congress members fighting him from within.

As anarcho-communists our loyalties must lie not with Trump or Biden (nor even professional politicians from labour or green parties, though we may hold our nose and vote for them here), but rather with the rest of the working class and striking alongside them for social change. It is vital that an independent left organisation be built in the US outside of the Democrats, and one that encourages autonomous working class struggle from below as comrades from Black Rose/Rosa Negra are attempting to do. The famed Eugene V. Debs, a founding member of the IWW in the early 20th century, put it best when he said: “I am not a Labor Leader; I do not want you to follow me or anyone else; if you are looking for a Moses to lead you out of this capitalist wilderness, you will stay right where you are. I would not lead you into the promised land if I could, because if I led you in, some one else would lead you out.”

We must also strive to build a serious revolutionary organisation in Australia as our struggle cannot be built from above simply by rearranging who sits within the state bureaucracy. Our  own resistance to this racist regime will require a serious libertarian socialist organisation, and even more importantly a revival of independent working class activity if we are to make any headway. We cannot just vote against racism – we as a class need to strike against it.

Mya Walmsley’s recent article “The Ballot Box or the Streets?” is a welcome contribution to the present debate among Australian anarchists regarding […]

This article first appeared in The Anvil, Vol 11 No 6, published 31 December 2022. What is the significance of the recent […]

This is the final article in a series of articles by Matt Crossin, ‘Critical Notes on Developments in the Anarchist Movement’. [This […]